So, me and my girlfriend climbed Croagh Patrick! We have lived close to this mountain for the past few years and have always said that we should climb it and today was the day. To be honest I thought it was going to be relatively easy but boy was I wrong! Now I’m not the fittest person going but I really was not ready for the climb ahead!

A statue of Saint Patrick under ‘The Reek’

Croagh Patrick which is nicknamed ‘The Reek’ is located outside of a town called Westport on the west coast of Ireland. It is a famous landmark as it is a place of pilgrimage and is in an iconic mountain point shape when looking at it from a distance. The tales that go with Croagh Patrick are with Saint Patrick who is the patron saint of Ireland. Most of you probably know about Saint Patrick from Saint Patricks Day on the 17th of March which is now celebrated all over the world. It is from the top of Croagh Patrick that Saint Patrick banished all the snakes and demons from Ireland. There is a church constructed at the top and mass is said up there during the time of pilgrimage and there has even been a wedding up there! Some people choose to climb the mountain in their bare feet as Saint Patrick did, but this is not advised. More information about this mountain and its history can be found here.

The church at the top of the mountain

The climb up Croagh Patrick is not really a climb but more a very steep walk. There are a couple of ways up the mountain, but we went the pilgrimage way which is a trail that leads up to about halfway up the mountain then a steep climb to the very top. I must be honest I was wrecked just getting to the part where the actual mountain starts as it’s a steep climb. The mountain looks very daunting when you are standing at the very base and the trail looks dangerous with loose rock and one way up and down. However, there were loads of people doing it even children, so we had to battle on and get to the top. 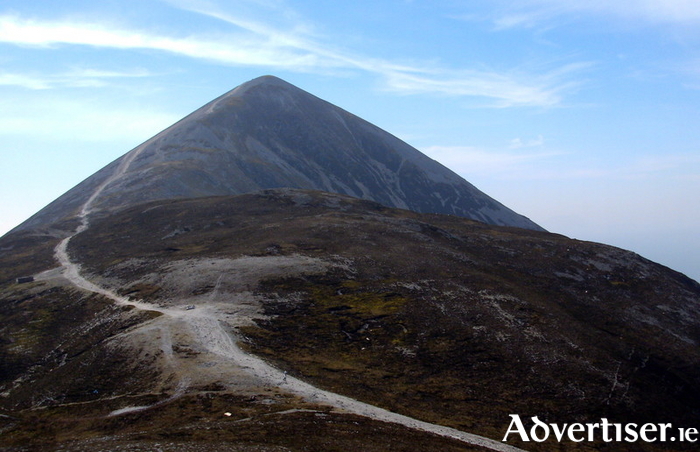 A view of the final climb to the top featured on Advertiser.ie

Once we got to the top the view was amazing! It was a great day to do the climb and you could see for miles in every direction inland and out to sea. It felt great to have made it to the top and it was a great achievement. We got a few of the necessary Instagram shots at the top and then began to make our descent. Getting down the top part is very tricky as its very steep and it is all loose rock. On the way down we met mountain rescue members with a man who had decided to climb in his bare feet and had nearly made it the whole was but was forced to stop due to the condition of his feet. He had to get airlifted off the mountain which was cool to see.

Picture taken by my girlfriend of our view at the top

Eventually we made it back down to the bottom and into the car safe and sound! Looking back up at the mountain it felt great and we had a great sense of achievement. Maybe getting to the top will even bring us some good luck as some people say!

That’s all for this post! It’s a bit of a longer read but I hope you guys enjoyed. Leave a comment if there are any questions you have about Croagh Patrick or our experience and I will answer as best I can!

Leave a like if you enjoyed and don’t forgot to give a follow to see all my new posts! Check out my other posts while you are here!